Starburst is an iconic Netent Slot which is hugely popular for its beautiful graphics and it’s easy to play demeanour. Play this cosmic slot for big win combos and its intergalactic wild extras!

NetEnt’s Starburst Slot is one of the original slots released by Netent and is probably the most iconic and popular of NetEnt slots today. Starbursts notoriety is probably helped by the fact that most free spins are given on Starburst Slot by online casinos, so what better way than to try Starburst for free?

How to Play Starburst Slot

Simply load the game and take in all of the vibrant and mesmerising graphics. The graphics are fantastic looking, and the slot is set against a backdrop which is like an arcade atmosphere set in deep space. The icons on the reels include stars and gems and space like hues. The soundtrack is very fitting and futuristic like too, and it adds to the theme very well.

Netent’s Starburst Slot Machine is a perfect slot for players who like playing high paced energising slots, with little distraction from other gimmick extra features. Starburst Slot by Netent, has been designed with 5-reels, 3-rows, and a nice added value perquisite of a Win Both Ways pay lines feature. This means that the winning pay lines run from left to right, and also right to left. This means more chances to get some active pay lines which will ultimately net you some nice wins.

As we mentioned, Starburst Slot is quite a high paced slot, but it is simple, yet effective. This review is of course based on our personal taste but some of you might find it lacks certain features you’re used to seeing by now. Keep in mind, that Starburst Slot is a little more traditional, yet modern in the aesthetical sense. The highlight of the Starburst slot is the innovative Starburst Wilds feature but, not that much else. But don't let that put you off.

With that said, Starburst Slot offers you the chance to win up to 50,000 coins and by getting the Starburst re-spins in additional to the wilds, will really help well you on the way to winning some of the maximum prize amount. 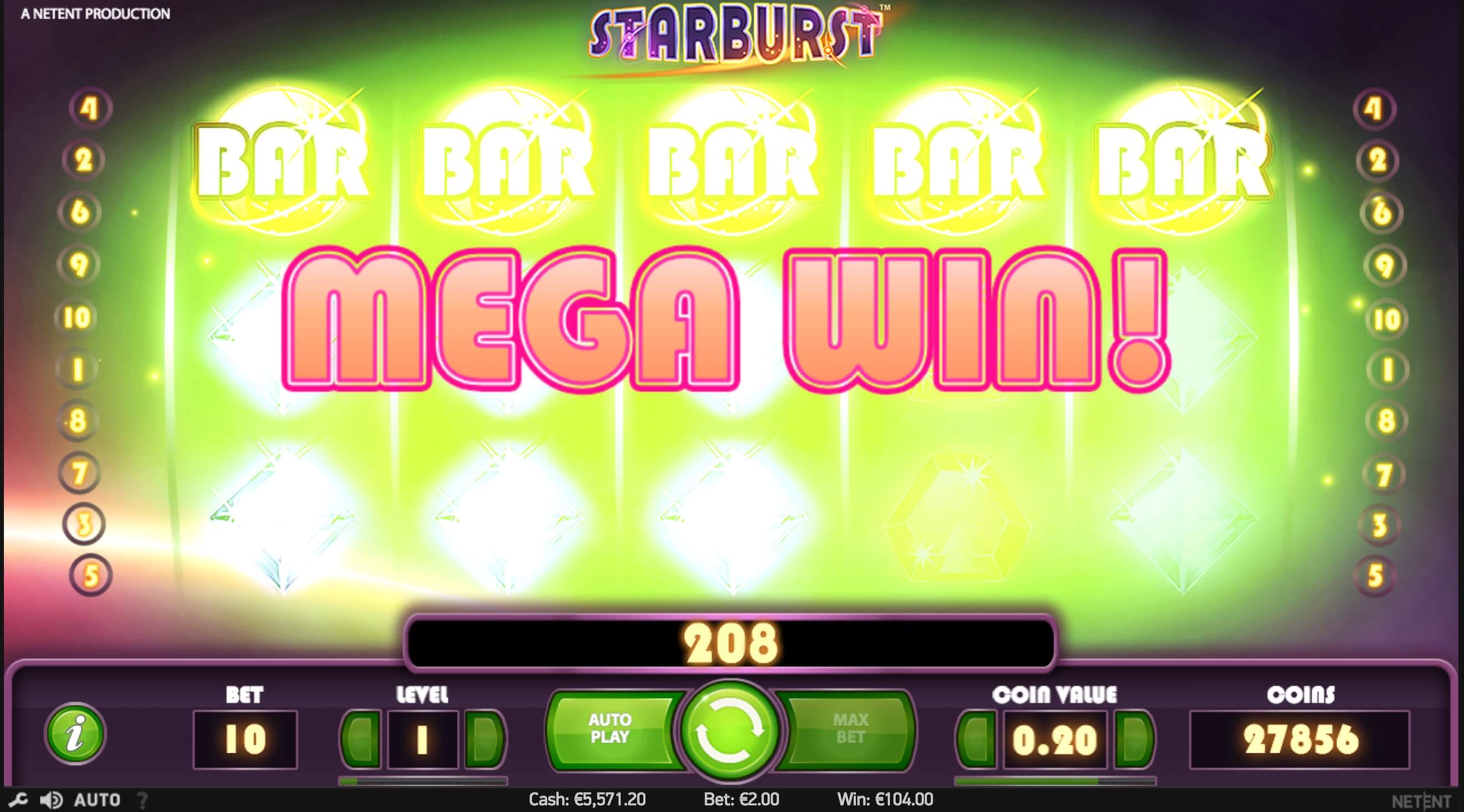 Starburst was one of the original Netent Slots to be transformed into a mobile slot. Starburst Touch™ is the mobile slot and the desktop counterpart. The great thing about Netent Touch™ Mobile Slots is that Netent believe devil is in the details and do not compromise anything.

Starburst Touch™ Slot looks great as it does in the main slot, features the same astral soundtrack and it’s really easy to play on not only miniature devices, but touch screens as well. We might even go as far as saying we prefer playing it on our IPad (Well.. we do!) If you love playing mobile slots on the go, then try Starburst Mobile slot as it won’t disappoint.

Starburst Slot is popular for a few good reasons; mainly being that it’s really easy to play and it looks awesome. Starburst Slot is timeless and doesn’t have that many features which are unlikable. Some players might feel that it lacks imagination, others may feel it simple but effective. It does all come down to personal choice but once you play Starburst, which you can do easily as many online casinos offer starburst free spins, you will see there is a certain appeal to playing it.

Even though Starburst doesn’t offer a free spins game, the Starburst wilds can offer you major wins as they can become stacked wilds and cover entire reels for some big win opportunities. Try this popular slot at a recommended Netent Casino below to see for yourself!